Congratulations to Everyone Who Completed the Fargo Marathon!!  Whether you participated in the 10K, Half-, or Full Marathon, you should be very, very proud of yourself! 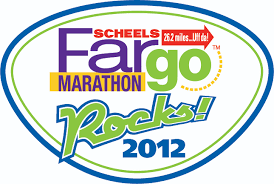 Positive Thought of the Day:

“In running, it doesn’t matter whether you come in first, in the middle of the pack, or last. You can say, ‘I have finished.’ There is a lot of satisfaction in that.”  – Fred Lebow, New York City Marathon co-founder

When job hunting one tends to run into quite a bit of rejection, which can lead to the notion of, “I’m such a loser. Why do I even try to do ANYTHING?” Listen, Eeyore. You can do lots of great things. I have so much faith in the great things you can accomplish that I’m going to issue you a challenge. During your job search I challenge you to do one thing you think cannot do or absolutely hate. If you can triumph over something that has kicked your self-confidence into the corner then you can land that dream job.

What started this notion for me was when I was facing some difficult challenges at work last summer. I just wasn’t thriving with the company I was working for due to reasons I won’t go into on this blog, so, unfortunately, I was dealing with a lot of tough emotions. I was pretty down in the dumps and needed a way to gain some confidence back into my life.

So, I decided to take up running. In order to give you some understanding on how much I hate running, it ranks right behind racism and homophobia as things I despise most in this world. For years I told myself I couldn’t run. My body wasn’t built for it. I didn’t have the stamina. Why bother? There are plenty of other ways to get some exercise. One day I randomly told myself I could do it and maintain it is a way of life. None of this, “I ran for one day so cross that off my Bucket List.” stuff. Was I going to run every day in hopes of completing a marathon? No. There’s a better chance of me going back to school to become an astrophysicist than becoming a marathon runner. My goal was to run; for however long my body allowed, multiples a week.

And, I started. And, it was awful. I walked more than I ran, but I still ran. Every time I would go out I would run a little bit farther. I kept running through the fall right until the ground had frozen over at the start of winter. I did it. I had reached a goal I never thought I’d make. I also found a new job that got me out of the unhappy situation I was in. Maybe it was just a random coincidence, but I also feel that inner-confidence and contentment tends to lead to outward change.

I don’t know if my job happiness hinges on the coming of the Harvest Moon, but at my then current job over the summer I was running into similar issues and politics I had run into in the past. My confidence started to pack its bags and write its Dear John letter. I couldn’t let it leave again, so I decided to add-on to my challenge of running. While I had picked my running “regiment” again once the weather had thawed, I still didn’t have the best endurance.

Positive Thought of the Day:

“If there is tomorrow when we’re not together there is something you must always remember. You are braver than you believe, stronger than you seem, and smarter than you think.” – Winnie the Pooh